Font Roja: the sanctuary that emerged from a lily

Numerous catholic temples were built in different places where, centuries ago, according to old legends, different miracles took place.

A short distance from the city of Alcoy (Alicante, Spain), southwest of it and in the middle of the Sierra del Menetjador (1354 masl) is the neoclassical sanctuary of Font Roja. Or, which is the same, the Hermitage of the Virgen de los Lirios and San Felipe Neri, located at an altitude of 1000 meters in the heart of a natural park, in the middle of a lush forest of holm oaks. The construction of this religious temple is due, according to tradition, or legend, to a miraculous find dating back to the 17th century.

According to the legend…

It was the month of August of the year 1653, when several religious figures were in the Carrascal de la Font Roja, enjoying a few days of retreat and spirituality, in a farm in the area. Among the attendees was Antoni Bonaventura Guerau i Montllor, coming from the Cathedral of Valencia, who, every morning, meditatively walked the lush paths of the place until, on August 21, a curious white flower caught his attention. It was a beautiful white lily, which he wanted to take with him, for which he had to uproot it by removing the bulb from the earth. Such was the surprise when observing the bulb that, without waiting for a second, ran in search of someone to corroborate what his eyes were seeing. The priest of Confrides was equally amazed and, later, the same sensation invaded the rest of the Christians. The image of the Virgin Mary could not only be admired in that bulb, but in all those that they later observed.
Ten years later, on August 21, 1663, an hermitage was inaugurated in the exact place where the first bulb was found.

The original hermitage was subjected to repair works in the year 1720 and, at the same time, a guest house was added. In 1742 the place was closed due to its ruinous condition, although it was rebuilt during the following two years. The hermitage that has arrived until our days began to be built in 1886, was inaugurated on June 14, 1891 and, at the same time, the access road was built. In the 1920s the chalets and the old hotel were erected, where the wealthiest families from Alcoy and the surrounding area used to go.

As a curious fact, on the facade of the chapel and next to the door there is an inscription that attests the level reached by the snow during the Nevà Grossa (the great snow), on December 27, 1926, which caused serious flaws in the whole region and in many places in Spain. 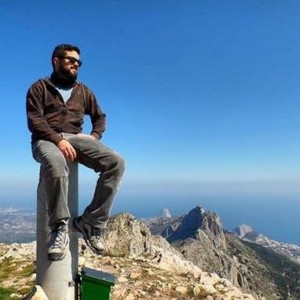 Uncle Roc and the treasure of Cabeçò d’Or